Latest on the private ambulance service

Fröhliche Weihnachten!
Nollaig Chridheil!!
Vrolijk Kerstfeest!
Joyeux Noël!
Nollaig Shona!
Nadolig Llawen!
To all our members and readers everywhere, we wish you a happy and joyful Christmas and a healthy 2021

The current Covid situation unfortunately delayed to start up of the new service in Oliva from Ambulancias LaPena. Their new launch date is now Jan 4th. They have sent out an appeal to try and get customers signed up ready for the start. This is a great service for Oliva.
Ambulancias LaPena will be at the Polivalent on the 18th December between 10.00 & 12.00 to answer your questions.
Earlier in the year we organised a discount for U3A members and they are not only going to keep that discount going ( €94 not €99 per Household), but they have also offered to hold off on charging the full amount (for our members)until January, rather than on sign up.

They offer a great ‘peace of mind’ service and we think they are worthwhile talking to if you are hesitant about what they offer. Most of the information is below including the new SOS button.
The policy consists of: an annual payment of €94 (U3A) in this policy emergencies are included (all kinds of emergencies: falls, dizziness, blows, etc.) inside the house and outside the house as long as it is inside the same population, the transfer in ambulance will be made to the nearby health center and if needed, the patient is transferred to the public or private hospital.
This service would be effective for all members of a household for a single payment per year. (the policy must specify how many people live in the house)
We also have in our services the rapid tests against the covid. (35 €)
We have added to our services some courses on first aid, defibrillator management, aquatic lifeguard and others.
Life call or SOS button
This device is a small emergency button.
It is used in elderly people and those who have little mobility.
This device has a built-in SIM card to make calls, when the person presses the emergency button, the device makes a call to the preloaded numbers that it has (there are 2) when the first call does not answer, it goes for the second number.
In addition to making the call, send an SMS to the number indicating that this person needs help with information on where they are and what has happened to them.
It also has a sensor to detect falls without pressing the button and thus detect a fall and give the alarm if the patient cannot.
contact details: Their office at Carretera de Denia, 4
And are open on Monday, Wednesday and Friday from 10:00 to 13:00 and Tuesday and Thursday from 5:00 p.m. to 8:00 p.m. You can contact them by email:
ambulanciasoliva@gmail.com
by phone at this number: 680760536 or by visiting our office.

The Night Sky in December

The Incredible Stars
Happy and Prosperous New Year to All. Let us hope the year brings an end to the terrible effects of the Corona Virus and we can once again enjoy some time with friends and family without impacting on other people’s health and welfare. Astronomy could be enjoyed during the gloom of 2020 as many people view the sky from their garden alone. Our regular fortnightly meetings were however cancelled and like many other groups we have continued to hold virtual meetings using zoom. The start of the year can be gloomy after the Christmas events however the evening sky holds some sparkle. Orion dominates the South and stands high above rooftops after dark. Last year there were expectations of the bright orange coloured star Betelguese, which marks Orion’s right shoulder undergoing a major outburst, a supernova.

That never happened and Betelguse recovered from its sudden dimming and I noted it slowly returning to its normal brightness. Orion has other objects for casually observing with binoculars and take the opportunity to view the “Orion Nebula” a place where new stars are forming and their glow illuminates the gas cloud. A relatively bright star cluster NGC1981 is just above the nebula and just below the middle star in “Orion’s Belt”. NGC1981 is composed of 10 stars. The stars may appear constant, however like all things they have a set lifetime. The brilliant star which marks Orion’s left leg, Rigel, shines blue/white, however this phase of its life is not going to last as it “burns” its hydrogen fuel rapidly and will undergo a rapid and disruptive series of events as it enters the later phase of its life as it expands into a Giant and throws off enormous amounts of its atmosphere. Astronomers have slowly built up knowledge of how stars form, shine, decay and end their lives. The brightest star we can see, Sirius which is a mere 8.61 light year distant and 200-300 million years old formed with a companion, Sirius B. Sirius B, the companion star, was much more massive and consumed its hydrogen fuel more voraciously. The star underwent a series of violent outbursts losing much of its mass and it collapsed to become an unseen “White Dwarf”, Sirius B which is also known as “the Pup”. Sirius B is invisible to most observers but when using a considerably large telescope and a method of obscuring the light from brilliant Sirius it is possible to glimpse it. If we had been able to view the pair of stars 120 million years ago, we would have witnessed the catastrophic end of that brilliant star. Whenever we observe the night-sky we may be lucky to witness some incredible event millions of km distant as a star suddenly ends its life. Some observers carefully study stars which are known to undergo regular and incredible surges in brightness (magnitude), some are easily viewed using binoculars. As you may notice the lives of stars are measured in millions or even billions of years however astronomers have produced accurate models of how stars form, shine and eventually end their lives. If you would like to find out more about astronomy please contact james.ince1@tiscali.co.uk or any member of the Bassetlaw Astronomical Society we welcome your questions. Have a healthy and enjoyable New Year

Dear Members, on behalf of the children of El Bastidor may I thank you all for your generosity and love in producing and donating the Christmas Present Shoeboxes, we managed to fill our quota , and our boxes, well done.
We sadly cannot have the party this year, hopefully next year, so we will deliver them on Friday 18th.
May we thank your Committee for their support, especially Nancy, Kathleen and John, without whose expertise and help this would not have happened.
Thanks again, stay safe, Feliz Navidad.
Steve.

A great new service for expats who can’t see their doctor and have translation problems when seen.

New English speaking medical clinics have recently been launched by Dr Margo Livingston, Doctor of Immunology and Advanced Nurse Practitioner (Masters degree) with her business partner Helena Davidson. This pair recognised the urgent need that many expats currently have during the pandemic with COVID-19, that they can’t easily get doctor’s appointments and also have difficulty understanding the conversation with a doctor during a telephone interview, if they don’t speak Spanish. Many people need basic medical care and follow up for illnesses unrelated to corona virus but these needs are sadly not being met due to the clamp down in services and focus on COVID-19. 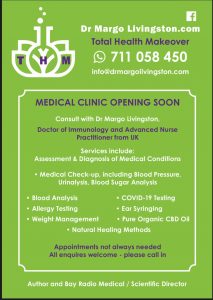